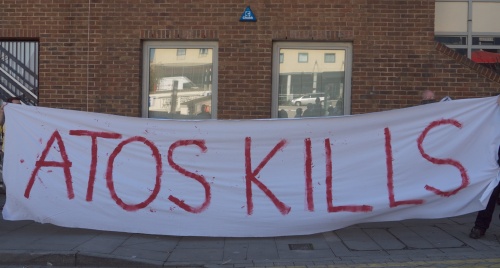 Disabled people, benefit claimants and supporters will be holding a vigil and remembrance event for those who have died due to the actions of Paralympic sponsor Atos.  The event will take place outside the company’s UK Head Office in Triton Square, Euston on Wednesday August 29th, the same day as the opening of the Paralympic Games. Meet 3.45pm for 4pm start.

Atos are responsible for carrying out the Government’s notorious Work Capability Assessment, a relentless health and disability assessment regime which has been used to slash vital benefits from hundred of thousands of sick and disabled people.

Tragically several people have committed suicide due to the endless, stressful assessments and the threat of poverty and destitution they bring.  An  investigation by the Daily Mirror found that 32 people a week die after being declared ‘fit for work’ by the company, whilst Channel 4′s Dispatches recently exposed the system as ‘toxic’ in the words of Atos’ own staff.

Campaigners will gather in the square at 3.30pm and will deliver a coffin full of messages from victims of Atos to the front door of the company’s headquarters.  A memorial service will then take place, involving a reading of the names of those who have died due to the company’s actions.  Some of the messages will be attached to black balloons and released and members of the congregation will speak of their own experiences at the hands of Atos.

All are welcome to attend and are asked to wear black if possible.

This event takes place during the National Week of Action Against Atos called by Disabled People Against Cuts (DPAC), to coincide with the London Paralympic Games.

Events are scheduled to take place in towns and cities around around the UK and in London disabled people and supporters will be back at Triton Square on Friday 31st August for the Closing Atos Ceremony.