Scoping Out The Workfare Exploiters 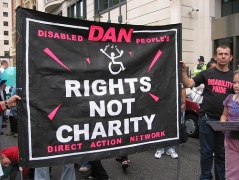 Yesterday Boycott Workfare called for people to contact the charity Scope as part of the week of action against workfare.

Once more people picked up the phones, or took to social networking sites, to demand that Scope refuse to have any more to do with forced, unpaid labour.

This led to Scope issuing a furious denial, claiming that Boycott Workfare were attacking Scope’s use of volunteers.  This was far from the case.  Scope are involved in providing Mandatory Work Activity (MWA) placements in their shops.  These are four week full time workfare placements which are inflicted on unemployed people deemed by the Jobcentre to not be trying hard enough to find work.  There is anecdotal evidence of Mandatory Work Activity being used as a punishment should someone fail to ‘volunteer’ for other workfare schemes such as Work Experience.

Whilst Scope claim all their workfare workers are ‘volunteers’ the evidence suggests this is far from the case.  A recent press release from the DWP hailed a Scope charity shop which had conscripted a ‘reluctant’ workfare worker:

More evidence of Scope’s involvement with forced labour emerged on twitter when @awesomesauceuk tweeted:  “Being sent on Mandatory Work Activity. Was supposed to be interviewed but wasn’t. Will “work” in Scope for 4 weeks from Fri 13th. ‪#MWA“

When Mandatory Work Activity was first proposed, the Social Services Advisory Committee (who advise Government on welfare) warned that the scheme was likely to target the most vulnerable and strongly recommended it should not go ahead.  They also noted, that despite Scope’s statement, claimants cannot volunteer for MWA, noting that this rendered the scheme punitive rather than a measure to help claimants back into work.  Predictably the Government ignored the Committee’s recommendations.

Sadly Scope’s involvement with mandatory Government schemes doesn’t end there.  Scope are a member of Disability Works, a consortium of charities formed to maximise income from the Work Programme.

Claimants of sickness and disability as well as unemployment benefits are placed on the Work Programme for a period of two years.  During that time charities such as Scope have unprecedented control over claimant’s lives, with the power to mandate participants to almost any activity they wish.

Currently people on sickness or disability benefits cannot be mandated to workfare, although the Government have floated plans to change this.  Claimants can however be subject to sanctions for missing a meeting, failing to attend a training course or any other ‘Work Related Activity’ that providers like Scope may dictate.

Whilst the Disability Works charities have claimed they are not involved with the sanctions process, this argument has been shown to be disengenuous, if not downright dishonest.  Work Programme charities are required to raise a Compliance Doubt should a participant fail to carry out mandated activity.  A Compliance Doubt is a referral to the DWP to sanction a claimant’s benefit.  Whilst the DWP have the final say on whether a sanction is applied, it is the Work Programme charities, like Scope, who are responsible for setting the process in motion.  Basically the DWP are the judges and Scope are the coppers, quite happy to make money from policing sick and disabled claimants.

The homelessness charity SHP (formerly the The Single Homeless Project) has already handed back their Work Programme contract after claiming the brutal sanctions regime may cause vulnerable people to have to ‘beg and steal’.  Sadly the big disability charities, which along with Scope include Mind, Mencap and Leonard Chesire Disability have no such scruples.

10,000 sanctions were applied to claimants on sickness  and disability benefits last year.  Many of these were due to Compliance Doubts raised by the charities involved in delivering Work Programme.  Sanctions are devastating for all claimants, leading to abject poverty as well as the risk of Housing Benefit payments being stopped endangering people’s homes.  To apply sanctions to claimants who are sick or disabled however is a new level of brutality.  Sick or disabled claimants may have special diets as part of their treatment, pay more in heating costs or have other costs such as fares to hospitals and GPs to manage.  To callously strip vital benefits away from this group, many of whom have life-threatening conditions, is unprecedented on the history of the Welfare State.

That charities like Scope should be part of this attack on the very people they claim to be established to help is beyond belief.   Work Programme, workfare and connivance in sanctions is fast bringing the entire charitable sector into disrepute.  It’s time that so called charities like Scope say enough is enough and hand back these savage contracts that have caused so much damage to sick and disabled benefit claimant’s live.

Boycott Workfare have re-issued their call to complain to Scope along with a response to yesterday’s statement. Scope are on twitter @scope.

21 responses to “Scoping Out The Workfare Exploiters”