How Universal Credit Will Create A Latchkey Generation of Hungry Children 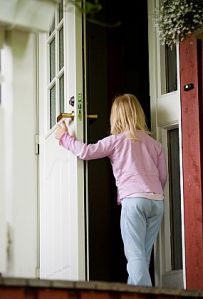 The Tory Government’s war on women is to escalate even further when Iain Duncan Smith’s brutal new welfare regime begins in 2014.

The new Universal Credit scheme will replace Child Tax Credits and Income Support for both working and non-working parents alike.  The scheme is intended to ‘make work pay’, however in reality few will be better off than they are under the current system.  Already Universal Credit, which was intended to simplify the benefits system, is mired in complexity and running both behind schedule and over budget.  The vast computer database behind the scheme was originally planned to be in place by 2013, however recent reports reveal that date has now been pushed back to mid 2014.

A generation of latchkey kids, living in unprecedented poverty, will be one of the consequences of the new regime which will treat parents with older children exactly the same way it treats those with no childcare responsibilities  at all.

Universal Credit is under-pinned by a ‘claimant commitment’ which means that claimants will find themselves at risk of benefit sanctions or workfare if they are unable to find work for 35 hours a week at the minimum wage.  Part time workers will be forced to leave work at the drop of a hat to attend interviews for full time work, whilst self-employed claimants will face in-work benefit cuts if they fail to earn enough money in any given month.

It will be the treatment of single and low earning parents which is perhaps one of the cruellest aspects of the draconian new measures which will see children punished for the perceived sins of their parents and parents punished should they put their children’s interests before those of the Jobcentre.

Single mums whose children are over the age of 13 will be expected to work up to 35 hours a week.  Under the new rules, they will also be expected to travel up to 90 minutes to and from work.  This will mean that a single parents in a 9 to 5 job could find themselves having to leave the house at 7.30 am and not return until half past six in the evening.

Whilst Iain Duncan Smith talks of truancy being one of the defining factors in increasing child poverty, he intends to take young people’s parents away at precisely the time they need to be getting the kids up for school.

Some childcare support is available under the scheme, but for those on low incomes, forced to spend a fortune on fares to get to work and back, it will prove to be unaffordable.  Only 70% of childcare costs are to be met under the new regime.

Once again the toff Government reveal they know nothing of the lives of those on low income.  No doubt ministers will point to the hard working middle classes who commute into London and leave the kids with child minders to get to work.  What they won’t mention is that a season ticket for many commuters can cost well over £100 a week  It’s not laziness that stops minimum wage workers from travelling long distances to work.  It’s unaffordable rail prices that trap people in the area in which they live.

Single mums could be forced to abandon their children to take up work that barely covers transport and childcare costs.  If they refuse they will face sanctions.  If they refuse more than once they could find themselves facing sanctions for up to three years.

Jobcentre staff – or whoever replaces them in the new system, which is set to be ‘digital by default’  – are to be given some discretion is assessing what kind of work is suitable for parents.  Whilst travel time and costs may be a factor that can be considered, the current target based culture inflicted by managers on DWP staff mean there will be constant pressure on advisors to sanction claimants.  Already it is the most vulnerable who are at highest risk of sanctions.  Figures suggest that of the 10,000 sanctions handed out to sick and disabled people last year, almost half of those were aimed at people with a mental health condition.  The harsh reality is that vital benefits which put food in children’s bellies will be at the mercy of the whims of DWP management.

Sanctioning parent’s benefits on such a huge scale however will still be a new low for even the DWP.  Under the current system, out of work parents can be forced to attend ‘Work Focused Interviews’ once their children are in school.  Failure to attend these interviews can result in a sanction, however these are the only sanctions currently in place for parents.

Parents will be subject to work related activity requirements, such as being sent on the Work Programme, or could be sent to carry out mandatory unpaid work  should Jobcentre staff decide they aren’t trying hard enough to find work.  Parents will be expected to take any job offered immediately, and will also face sanctions for leaving a job, failing to attend workfare, or missing a back to work style interview with fraud ridden parasites like A4e.

Like now, those sanctioned will be able to make a claim for Hardship Payments.  However the ‘work related’ requirements will be carried over to Hardship Payment schemes, meaning even these can now be stripped leaving families with nothing at all to live on.  Even with these payments, the new rules state they will only be only be intended to meet immediate costs in relation to accommodation, heating, food and hygiene.  There is no mention of children’s clothes, toys, fares to school, household items and all of the endless other expenses that having kids can bring.

The nightmare scenario will see parents torn between providing adequate supervision and support for their children, or being sent to work from dusk till dawn 50 miles away for the meagre minimum wage.  Mums who cut down hours, or refuse full time work, perhaps because their teenage child is going through a rough time, will be stripped of benefits.  If they continue to refuse to abandon their children to the street, then they will not even qualify for Hardship Payments, meaning children going hungry and homelessness as rent goes unpaid.

Sanctioning parents on this scale is unprecedented in the history of the Welfare State and there has been little thought as to the consequences, both for the children affected and wider society.  A study carried out by the DWP themselves (PDF), based on the small number of parents sanctioned for not attending Work Focused Interviews makes for grim reading.  The report found that “the most common causes of a lone parent failing to attend (Work Focused Interviews) were centred on caring responsibilities, ill health and the customer simply forgetting.”

Despite the repeated slurs aimed at feckless  single parents the report found that: “there was no evidence of lone parents making an active decision to not
attend a Work Focused Interview.”

Perhaps of most concern is that the study found that those sanctioned had “demonstrated higher levels of ill health, both of themselves and of their children” and that a “greater prevalence of debt” was found amongst sanctioned parents.

Significantly the study also revealed:  “In response to the key research question of this project, this study has found that amongst the lone parents in this sample, the sanction regime has had negligible effects upon labour market behaviour.”

In other words sanctions don’t encourage parents to find work and simply increase the crippling financial pressures they already face.

Despite all this sanctions are to get longer, tougher and be extended to hundreds of thousands more claimants.  Hardship Payments are now to be recoverable, meaning that even once the sanction is over, benefit payments will continue to be reduced until they have been paid back.  With Hardship Payments covering soaring rents, this could leave some claimants thousands of pounds in debt to the Government, to add to the debts most of them already have.

It is not just single parents who will be affected by the ruthless new system.  Under the new rules, couple with children will both be expected to work up to 35 hours a week if they are only earning minimum wage.  Claimant conditionality for Universal Credit, which means the aforementioned workfare and sanctions regime, will only stop when both parents are earning minimum wage in full time jobs.  This grotesque economic discrimination will mean that if one partner earns twice the minimum wage then his partner can stay at home and look after the children without constant harassment from DWP busybodies.  However should one partner only earn minimum wage then the other will be expected to go out and work full time themselves.  The right for one parent to stay at home, whilst still in receipt of Universal Credit to top up family earning, will only be for those better off.  Once again this toff Government is punishing those simply because they are not able to earn a higher than minimum wage.

Whilst millions of parents are likely to be affected by the changes when Universal Credit is brought in, in practice it will be single mums, and mums in low income families, who will face the most insidious aspects of the scheme.  It will be their children who suffer the most hardship as lives and futures are devastated, all because of Iain Duncan Smith’s obsession with forcing mothers into full time work.  It has already been admitted that Universal Credit probably won’t save any money.  It is simply an ideological attack, executed by rich men, on some of the most vulnerable and poorest families.

Swivel eyed right wingers have often claimed there is no real poverty in the UK because children don’t go hungry.  Iain Duncan Smith’s brutal and ignorant reforms will mean that in future crippling debt, hungry children, forced labour and teenagers left on their own devices to prowl the streets, will be enshrined in social legislation.

The draft regulation for Universal Credit have just been published and are open to consultation at: http://ssac.independent.gov.uk/consult.shtml

Universal Credit, Self Employment and the Minimum Wage

Universal Credit’s Attack on Householders (and who really benefits)

How Universal Credit Will Split Up Families