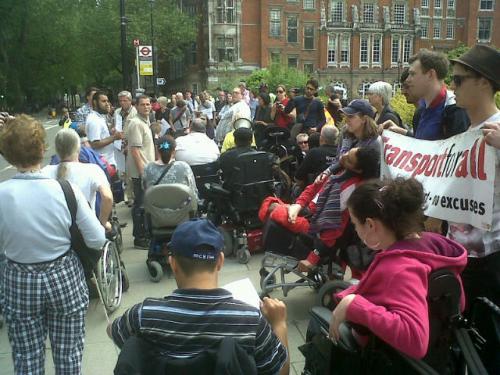 Yesterday’s Right To Ride protest, organised by Disabled People Against Cuts (DPAC) and Transport For All, revealed the real barriers disabled people face when forced to depend on a public transport system which is unfit for purpose.

After a lobby in Parliament scores of people met at the Abingdon Street bus stop opposite the Palace of Westminster.  Several speeches were made to a swelling crowd and then at 4pm a line of wheelchair users formed to attempt to take the 87 Bus to Transport For London headquarters in Covent Garden. 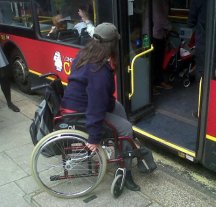 Unfortunately when the bus arrived wheelchairs users were unable to board due to the bus stop being inaccessible.  This prompted a spontaneous protest as people moved out into the road and blocked the bus from leaving.  A second bus turned up shortly afterwards which was also blocked after denying disabled people access.

The blockade lasted for about an hour, before the disabled protesters and supporters agreed to leave together.

According to a Transport For All survey in 2010, only around 50% of London bus stops comply with legislation aimed at ensuring access for disabled people.  On the tube the situation is even worse, with just 64 out of 240 stations having step free access.

Hundreds of thousands of sick and disabled people are soon to be stripped of  Disability Living Allowance (DLA).  This benefit, available to those in and out of work, is designed to help people mitigate the huge costs in transport, care and personal equipment of living with a disability.  DLA is also a ‘passport’ benefit, meaning that those who qualify often automatically qualify for motability schemes, which provides items such as wheelchair suitable transport, and taxi card schemes.  Other community transport schemes are also falling victim to brutal cuts.

Yesterday’s protest was a well timed (and well supported) action which revealed a glimpse of the chaos that will be caused in people’s lives if they are forced onto a public transport system which is not designed for their needs.

It is not bus driver’s fault that buses are inaccessible – they deserve everyone’s support when they strike this Friday. 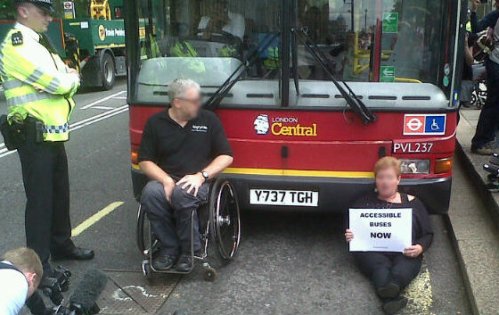 This entry was posted in Uncategorized and tagged accessibility, benefit cuts, Disabled People Against Cuts (DPAC), London Transport, Transport For All. Bookmark the permalink.