British Heart Foundation – The Charity at the Heart of Workfare 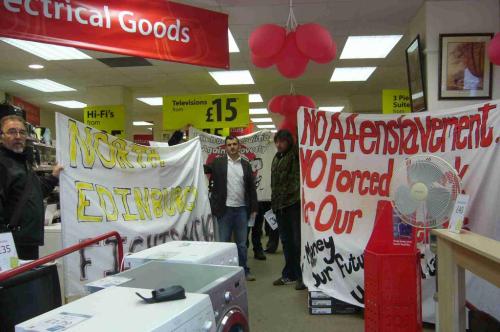 A recent High Street investigation by Boycott Workfare has unveiled several new workfare sharks operating under our very noses.  Fake hippies Bodyshop, temporary shoe retailers (they fall apart) Shoezone, and Dorothy Perkins are all revealed to use, or to have used, forced labour in their stores.

Dorothy Perkins in particular is interesting as their owners, the Arcadia group, has previously denied any of their stores being involved in workfare.  Surely the huge retailing chain owned by tax dodging bastard Philip Green wouldn’t be lying to us, would they?  This leaves Top Shop, British Home Stores and other Arcadia chain stores with some questions to answer.

Boycott Workfare also single out known workfare exploiters, the British Heart Foundation, as deserving a special mention for their sheer enthusiasm for forced labour.  According to Boycott Workfare, “The manager boasted that 5/6 people will work 30 hour weeks at any one time, with workfare provider Seetec sending fresh replacements at the end of each month!”.

When the workfare row blew up at the beginning of the year many charities issued furious, if not quite honest denials, abut their involvement with the scheme.  Some, such as Shelter and Marie Curie, very publicly distanced themselves from the scheme.  British Heart Foundation (@TheBHF) however remained silent throughout.

From the investigation by Boycott Workfare, it would appear the charity are involved in the Mandatory Work Activity scheme.  This is four week block of forced labour handed out to unemployed people who aren’t deemed to be trying hard enough to find work.  It effectively operates as a system of Community Service for the unemployed, many of whom may have health conditions which might mean full time work is unsuitable.

Some, like Stephen Hill of Derbyshire, may even have serious heart conditions.  Mr Hill tragically died of a heart attack a month after being found fit for work and ineligible for sickness benefits.  Had he lived he might have found himself forced to work in a British Heart Foundation charity shop for no pay.

British Heart Foundation are also known to have used workfare in Edinburgh where they have already faced at least one occupation (pic above).  The charity are the biggest charity retailers in the UK and earned a whopping £31 million in profit last year.  It’s clear that not paying staff is good business.

BHF charity boss Peter Hollins is one of the UK’s highest paid charity bosses.  The latest publicly available figures show he earned a staggering £153,000 way back in 2008.  Predictably he is an Oxbridge toff.

British Heart Foundation have a forum on their website should anyone wish to discuss the organisation’s use of forced labour.  They are on twitter @TheBHF and facebook at: http://www.facebook.com/bhf

The Government are now refusing to tell us which charities and companies are using workfare.  Boycott Workfare have some tips on their website of how to track down workfare exploiters.  If you know of any organisation using workfare, or are on workfare yourself, please contact them and help keep the direct action target list up to date:  info@boycottworkfare.org