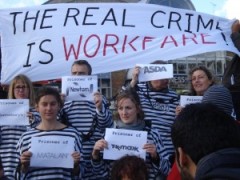 The Government are lying to our children that they should do ‘work experience’ in order to find a job, despite recent figures revealing it barely increases their chances of finding work at all.

Last week Chris Grayling attempted to hail the Work Experience scheme as a huge success brandishing research that shows those who had been on the scheme were 16% more likely to be off benefits than those who hadn’t.

This claim, which is far from impressive in itself, does little to prove that Work Experience is actually helping people find work.  Grayling was referring to a study commissioned by the DWP which tracked over 3000 people who had participated in the scheme along with a similar number who didn’t.

The problem is establishing whether those claimants were a similar group, in terms of not just prior work history and education, but other factors such as the local labour market or whether the participants were disabled.

And the DWP don’t have much of this information.  Whilst they can make some estimates of whether a young person has worked before using tax office data, they have no idea what the educational background of the individual concerned is.  They don’t know whether they have a criminal record or are affected by homelessness.  They don’t even know if someone has a disability or a health condition unless they have been told about them by the claimant and someone has bothered to record it.

This leaves researchers with only very crude estimates as to whether the two sample groups were the same.  The report says:

“For example, while we have not been able to observe an individual’s qualifications, personality type, life experience, experience of discrimination, confidence, health, language skills or happiness, we hope that by controlling for gender, age, ethnicity, disability, local labour market characteristics, labour market history, prior programme participation etc. the model will capture virtually all of their influence by proxy.”

They attempt to measure someone’s motivation to find work, or their possible value to employers, by using things like ethnicity.  They make an assumption that if they average things out like skin colour, the genitals they possess or where they happen to live, this will reflect how motivated or likely to find work they are.  This is bogus and verging on racism.  Under these factors a young black man fresh out of university could be statistically comparable to a young black man fresh out of prison.

They can apply all the statistical analysis to the data they want, it doesn’t change the fact that the raw parameters are verging on meaningless when attempting to measure motivation.  Black people are no more or less motivated than white people.  Employer racism is sadly still a problem for some young people looking for work, it is far from the only factor at play.  And no Government Work Experience scheme is likely to change that.

The strongest possible measure of similarity is an individual’s employment history, but even this is flawed because as the researchers admit:

“Figure 4.3 highlights imperfections in the P45 HMRC employment data and exposes gaps in our understanding of an individual’s status. In Figures 4.1 and 4.3, at 52 weeks before starting, 23% were in employment and 33% were on benefit (there will be some overlap between these two figures). This means that at least 44% (how many more depends on the degree of overlap) who are recorded as neither on benefit nor in employment. Their status is unknown; some might be in education but others will be in employment but are not recorded to be in work at that time. Moreover, in the week of starting Work Experience, 13% were employed; we would expect the real employment rate to be close to zero because all participants were actually claiming benefit in this week.”

So according to their data 13% of Work Experience participants were already in employment when the study began!  The researchers warn that “the employment impact estimates rely on imperfect data and should be treated with a degree of caution.”

One thing is clear from their research, which is that many Work Experience participants already had substantial ‘work experience’ .  This leave Ministerial claims that it is a necessary scheme to teach young people about the world of work looking somewhat flaky.

There is also a way to measure how employable participants in the scheme were against those who didn’t sign up.  Employers have a choice of who they take on work experience.  Therefore those participating in the scheme have already been selected by an employer as suitable for workfare.  Some may have even attended an interview.  It’s entirely possible that unscrupulous employers may offer someone a job, but expect them to do a couple of months workfare first.  This brings all kinds of benefits to the employer, the main one of course being free labour.

The conclusion of the report acknowledges some, if not all, of the above problems with the study.  It also cautions that there may be an effect on the overall labour market of the Work Experience Programme warning that: “it is possible that the programme may have incurred some substitution effects (i.e. an employee taken on as part of WE by an employer is substituted for someone else who would have been hired).”

Grayling’s claims that young people who participate in Work Experience are a meagre 16% more likely to come off benefits than those who don’t may well be true but that is no indication of the success of the programme (and that’s come off benefits, not necessarily find work).

It is not possible to estimate with any confidence the higher levels of motivation or employability of work experience participants using the crude analysis in the study.  All we can be certain of is that it represents some skewing of the figures.  We can never know how many employers offer young people a job but demand they carry out work experience as a trial period first.  And we just don’t know how many people would have been given real jobs if the Government had not promised employers endless supplies of free labour.

But it’s really not inconceivable that undertaking Work Experience has zero impact on whether young people actually get a job or not.  All we know is that young people who volunteer for the scheme, and pass a selection process with an employer, are slightly more likely than those who don’t to be in work a few months later.  We also know that most of them probably won’t be in work few months later.

The Government’s new Youth Contract is workfare on a huge scale.  Whether this will actually be able to be carried out now sanctions have been dropped from many workfare schemes is unclear.  What is for sure is that on the evidence Grayling has presented then it is unlikely to have any effect on youth unemployment.

The only people workfare works for are exploitative employers who are being handed tax payer funded free labour on an industrial scale.  Workfare is little more than a state hand out to people like Tesco and Holland & Barrett. It is time to end this ludicrous waste of money and lives and demand that everybody is paid a wage for the work they do.

You can read the study at: http://statistics.dwp.gov.uk/asd/asd1/adhoc_analysis/2012/early_impacts_of_work_experience.pdf

This entry was posted in Uncategorized. Bookmark the permalink.