One Quarter of Holland & Barrett Staff Could Soon Be Workfare Slaves 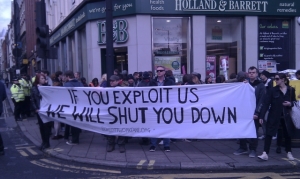 With the Guardian today reporting that young people who refuse the Work Experience scheme face workfare under a different scheme, it appears that Chris Grayling plans to carry on regardless with forced labour.  It seems he once again lied through his teeth, this time to major employers and charities, when he said that Work Experience is now entirely voluntary.

One company set to benefit are snake oil salesmen Holland & Barrett who could soon have an unpaid labour force representing almost a quarter of their workers.

According to the programme for Chris Grayling’s upcoming workfare conference (PDF), where the company will be hosting a seminar, ‘Holland and Barrett have committed to supporting one thousand young people over the next twelve months’ by delivering ‘placements and support’ in partnership with Jobcentre Plus.

Whether these people will be supported by being forced to work for free for two months under the Government’s Work Experience Scheme, or ‘helped’ by being mandated to six month workfare placements on the Work Programme, is unclear.  What is for sure is that unpaid staff are set to make up a huge percentage of the company’s total workforce which was last year estimated to be 3,586 people strong.

No company would undertake such a huge scheme unless it had been deemed highly profitable to do so.  Especially not Holland & Barrett.

The company’s hippy ethos is as fake as the pretend medicines they sell.  Holland & Barrett are owned by the notorious Carlyle Group, an arms dealing bunch of private equity bastards who have included such war mongering scum as George Bush Snr and former US Secretary of State James Baker as their former employees.  The Carlyle Group also own a significant chunk of tax dodging bastards Boots, who take a rather different approach to health care than hippy dippy Holland & Barrett.  If you back both sides you can’t lose as the Carlyle Group know only too well, having also had the bin Laden family on their books in the past.

Despite being the target of several protests Holland & Barrett have remained quiet on their use of forced labour.  They are somewhat shy of the internet as well, with no facebook page or active twitter feed.  It’s almost as if they’ve something to be ashamed of.  They can be contacted via their website at: http://www.hollandandbarrett.com/pages/contactus.asp

Alternatively why not pay them a visit and ask about their role as one of the UK’s biggest workfare exploiters.

Above pic taken from : http://pcseuston.org.uk/photos-from-boycott-workfare-day-of-action-oxford-street-3rd-march-2012/

Join the protest outside the workfare conference!