Holiday Inn Are Out of Workfare! 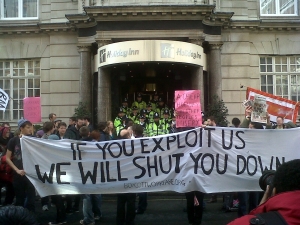 After being confronted with an angry mob at Saturday’s Boycott Workfare protest it appears that Holiday Inn will not be participating further in the Work Programme.  A statement on their facebook page reads:

“IHG carried out a project in 17 of its hotels that has now finished, giving 24 young people work experience as part of the Government’s ‘Getting Britain Working’ initiative. We have no current plans to further participate. We are focused on our IHG Academy programme which provides talented local people with the training to get jobs in the hospitality industry.”

Around 100 people attended the Central London action as part of the National Day of Action, with several businesses visited and closed including McDonalds, Pizza Hut and Holland & Barrett.  The protest ended at Holiday Inn who are known to have employed people for no pay on the government’s Work Programme scheme.  The lobby was briefly occupied and then police thronged the steps blocking anyone from coming in or out.

This morning’s statement shows that these organisations are just as receptive to pressure as before Chris Grayling attempted to sweep workfare under the carpet by possibly dropping some sanctions from on of the five workfare schemes.

The campaign against all workfare exploiters continues.  Pizza Hut have so far remained quiet despite their facebook page being bombarded after the weekend’s protests.  Corporate scum  McDonalds, obviously, also appear unrepentant and are happy to continue using forced labour.  Primark, Holland & Barrett, Savers, Poundstretchers and Wilkinsons have all kept schtum and may well still be using workfare.

Holiday Inn join Tesco, HMV, Sainsburys, Waterstones and Boots as companies who claim to no longer be involved in workfare.  Charities Shelter, Oxfam and Marie Curie have also pulled out of the scheme.  ASDA, Argos, Matalan and Barnados are on the fence.  If you are sent to any of these organisations to work unpaid under threat of benefit sanctions please let contact Boycott Workfare or leave details in the comments.  Vigilence is vital.  If they exploit us, any of us, we will be back.

Sadly several big disability charities and homeless charities are still very much involved in the scheme. The word is that @crisis_uk have now also become involved in Work Programme.  Pressure needs to be maintained.  It works.

7 responses to “Holiday Inn Are Out of Workfare!”