20 Towns And Cities Line Up to Take Action Against Workfare 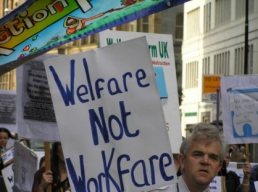 Come to the protest the Tories want to ban!

Despite hysterical Tory threats to crack down on workfare protest’s, 20 towns and cities have lined up to take action next Saturday 3rd March and the number is growing daily.

A five day online protest beginning tonight will kick things off, you can find all the details at: http://www.facebook.com/events/373373192687532/

With ministers telling bare faced lies in the press, and government documents being disappeared, or hastily re-written, to cover up for their fibs, more than ever the pressure needs to be stepped up. Rarely has a government looked so weak as they flounder around, bewildered by public disgust at the likes of Tesco and ASDA forcing benefit claimants to work nightshifts at the tax payer’s expense.

This government is vulnerable like never before on workfare. The entire policy of welfare reform depends on it. Already Chris Grayling and Iain Duncan Smith have lied that workfare isn’t mandatory on the government’s flagship Work Programme, plunging the scheme into chaos at grassroots level.

Plans revealed recently to force sick and disabled people to work without end for their benefits are now sure to be abandoned. As major retailers and charities pull out of workfare, it matter’s little what the government tries to do or say. Every company that pulls out is another nail in the coffin of the government’s forced labour schemes.

Four actions are set to take place in London alone, in Lewisham, Hackney, Brixton and Central London. Meet outside BHS on Oxford Street at 11.30am, or visit the Boycott Workfare website for details of all protests at: http://www.boycottworkfare.org/?p=359

The Day of Action was called by Boycott Workfare, an unaffiliated claimant led group who have been campaigning against workfare since before this government weren’t elected.

This day has nothing to do with the SWP, despite the lies ministers tell.

Workfare affects all workers, as wages are driven down, overtime slashed, and much needed jobs go to benefits claimants forced to work without a wage.  It is down to all of us to resist this attack on wages and the unemployed.

Join in online, then to the streets on Saturday March 3rd!

This entry was posted in Uncategorized and tagged boycott workfare, National Day of Action Against Workfare, work programme, workfare protests. Bookmark the permalink.