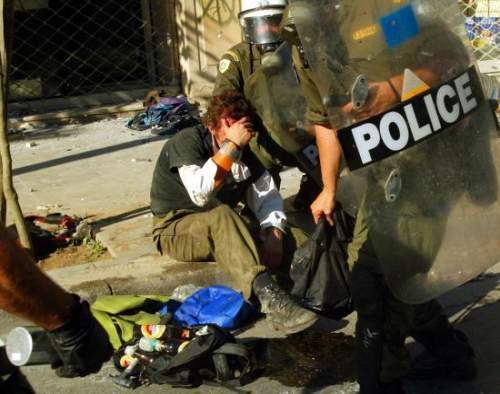 A demonstration is planned at the Greek Embassy in London on the first day of the trial at 2pm, Friday 14th January 2011.

Check the website or facebook pages for full details nearer the time as well as regular updates on the campaign.

Background: Beaten Up, Fitted Up, Don’t Let Them Get Banged Up
…
Over a hundred people were arrested after a demonstration confronting the European Union summit, held in Thessaloniki in Greece back in 2003. Seven people were imprisoned and held on remand, including UK protester Simon Chapman. The prisoners began a hunger strike that lasted more than 50 days.

A massive worldwide solidarity campaign followed including demonstrations, direct action and occupations leading to all seven being released on bail. All the charges were eventually dropped.

Years later after appeals from the Prosecutor the charges were reinstated. The first case finally came before the Courts in January 2008 where Simon Chapman and three of the other defendants – Suleiman “Kastro” Dakdouk (Syrian origin), Fernando Perez Gorraiz (Spain) and Michaelis Triakapis (Greece) – were found guilty.

All of those accused maintain their innocence and video and photographic evidence clearly shows police planting a rucksack filled with petrol bombs next to Simon see the photo, and also see: http://athens.indymedia.org/front.php3?lang=en&article_id=162765.

This didn’t stop him receiving a prison sentences of more than eight years, with the other defendants all receiving over five years.

They will now face the Appeal Court again in January 2011, when they have the opportunity to appeal against their convictions. This means we have less than two months to build a campaign, raise vital funds and show true global solidarity to the defendants.

Solidarity with the Thessaloniki 4!
http://www.salonikisolidarity.org.uk/

This entry was posted in Uncategorized and tagged Simon Chapman, Thessaloniki 4. Bookmark the permalink.